Tel-Aviv based multi-disciplinary artist Etamar Beglikter has me both intrigued and perplexed. It is the cultural, social and ecological layers that are portrayed in his artworks that have me asking so many questions.

Beglikter uses a range of multi-mediums like clay, plaster, tar and iron to create his art. I am particularly drawn to his paper art pieces, such as “44 Butterflies”, “Tribute to Menashe Kadishman” and his series “Cartoon Encyclopedia”. During his art studies (2003 to 2010), this Master Degree graduate of the Bezalel Academy of Arts and Design started using paper and transforming it into art objects for the first time. He took volumes of the Israeli Encyclopedia Hebraica, whose publication was one of the most significant cultural projects undertaken during the first years of Israeli statehood, and created “Garbage Pail” and “Broom” (In Hebrew “Matata” deliberately spelled wrong). These artworks were emotionally shocking to viewers and difficult to accept, as encyclopedias were considered “sacred” books of knowledge and wisdom. Beglikter admits that the impact of those artworks in 2007 has since softened considerably, due to the ushering of the Google and Wikipedia information era.

Part of Beglikter’s art influence comes from the theories of Dr. Baruch Blich, a lecturer at Bezalel who discusses themes such as visual languages, high culture vs marginal culture and mass media. Within his series “Cartoon Encyclopedia”, Beglikter manually cuts out Encyclopedias into icons of comic figures such as Mickey Mouse and Popeye. These artworks toy with the communication of high culture (intellectuals, elite thinkers) versus the phenomena of icon communication: a visual language that oddly enough is understood globally without the aid of the written word. “Tribute to Menashe Kadishman” is an impressive installation composed of hundreds of cut out faces, which are also composed of encyclopedia volumes based on the artwork of Kadishman’s “Shalekhet or Fallen Leaves”, which is part of the permanent exhibition at the Jewish Museum in Berlin. With this installation, Beglikter not only wants to honor one of Israeli’s first and finest art masters, but also wishes to connect old Israeli art culture with the new. After our conversation, Beglikter leaves me with a humble and modest impression. The truth is that this young contemporary artist is highly appreciated in his homeland. Recently the Knesset (Israeli Government building) and Yad Vashem (center and museum of Holocaust History) both bought his works. Etamar Beglikter’s paper art objects are currently displayed in two museums: Paper Biennale Tel-Aviv at the Eretz Israel Museum until March 2014 and the Janco DaDa Museum in Ein Hod. Now that is nothing to be modest about! I’m pretty excited to follow all upcoming projects of this amazing artist. "Amazed by paper's unexpected ways, I opened this blog titled “Paper Art View” in April of 2013. I wish to share with you the creative delights of paper artists, paper events and my own paper artworks. I am happy that you are part of my incredible adventure within the fascinating paper art world! Love you, love paper, love art!"

Thank you for taking the time to discover my work. If what you see inspires you, feel free to sign up for my once in 2 months newsletter, which will announce new works and upcoming events, while sharing my blog posts and other items of interest. 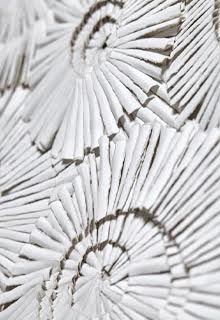